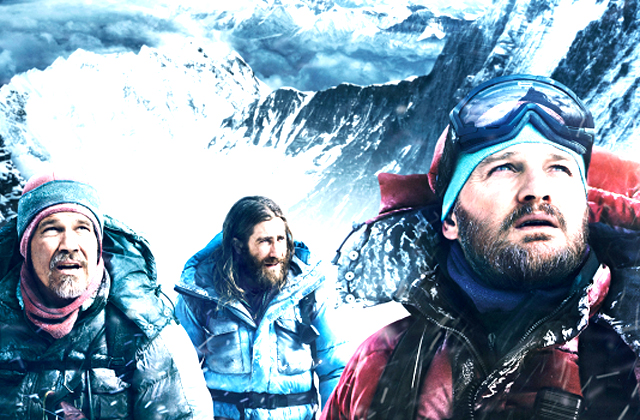 I went to see the “Everest” with the mind of a person who likes adventure travel, enjoy the great stay and very much a homage to mother nature. It is with the mind that the film did not disappoint. The great epic scene recorded by IMAX cameras, and 3D techniques are cared through each frame to show the depth and buoyancy of scenery, Everest is right before my eyes as to what I know, extremely beautiful, but also extremely dangerous. The danger is not only expressed in the snow and the steep slopes, the danger is also director Baltasar Kormakur told through a disaster occurred in 1996 for two mountaineering expedition group has claimed the lives of many people from which it questioned for people who want to use the Everest adventure tourism.
The film begins with scenes lies somewhere between the journey to conquer the peak 8.848m compared to sea level, Everest out, wild, beautiful and full of threat, no trees, snow and rock only . On it are extremely tiny human being can resist winds of up to nearly 200 km / h in order to move forward. Jon Krakauer journalist (Michael Kelly) has asked the participants climbing: “Why?” (Why to conquer this mountain?) Yes, why we crave it when conquering know that: “the more up to my peak as close near death?”
Each person has his own purposes, the only woman in the group Yasuko Namba (Naoko Mori) want to conquer peaks when she finally conquered all 6 peaks around the world, Beck Weathers (Josh Brolin) wanted conquer to dispel the dark clouds surrounded the mind and its fatigue life, Doug Hansen (John Hawkes) want to prove themselves can do something extraordinary … They gathered under the command of Rob Hall (Jason Clarke), man had conquered Everest several times and considered it to be his profession, tour guide for adventure tourism company by Adventure Consultants founder himself.
Under the second scenario writer William Nicholson and Simon Beaufoy, director Baltasar Kormakur built strictly according to the film classic three-act structure of Hollywood. Rob Hall farewell pregnant wife to head to Nepal for his journey. The smiles, and words worry gives us an uneasy premonition. Since then, the film in slow motion, jump up and tactics introduced tell us portraits of each member of the expedition and their personality. Similarly, the wide-angle scene is frequently used to portray a portrait of the country Nepal and finally, the “monster” Mother Nature’s Everest.
The journey started. The higher the larger the wind, air and less oxygen. Rob Hall’s confidence in his ability with a precise plan in terms of time is in place and must comply to ensure safety. Besides, he also ignored personal ego to cooperate with Scott Fischer (Jake Gyllenhaal) – a guided tour of the other delegations. Scott had opposed personalities Rob, wild and careless, subjective and despise everything. “The more you climb the more approaching death.” Rob Hall said so, members of professional climbing all know that to prepare yourself mentally ready for everything. But Everest is unusual and unpredictable, and it can break the spirit of the tiny individual who at any time.
The tragedy happened, like what we had expected at the outset movie. Everest bestir himself. Conflict happens. Human nature to fear, and fear of death. But the film does not push the pace high. It remains the same slowness. Thereby, as if to emphasize directed more to all of us that “the summit is right there, and the man is too small to escape his own ambitions.” Poetic nature of the tragedy is represented by cinema. The film is a beautiful place, the death does not bring menacing, but just made us keenly about dreams so big that in order to achieve it we must sometimes exchanged for my whole life. Rob Hall’s experience is too low compared to the indifference of nature.
While the majestic and beautiful, but the film inevitably very regrettable shortcomings. These omissions from wordy script, with a basic narrative structure but without the costly bottlenecks can create emotions to viewers from a true story. Furthermore, the role of Scott Fischer too dim compared to how he was introduced to the viewer feels feeling of uncertainty. The ambition of the director is to bring viewers Everest with IMAX cameras and real context brings a reverse effect, people forget the tragedy heartbreaking loss that was absorbed into the tiny spiers located in elevation 8,848.
However, the film brings Everest is a great experience for the audience, with widescreen (especially IMAX), a portrait of the dream that every climber wants them to be implemented and made available to infinity impressive. Go see Everest is not going to listen to retell the story has been the tragedy that shook his heart. Which is going to understand the power of nature, survival instinct of man, and Everest. Yes, it is important Everest, the peak of all peaks. Dream the impossible dream of many an explanation: “Why should we desire to get their hands on the roof of the world to that?”
For me, I believe, every conquest in life, have only one purpose is to win ourselves, conquer yourself.
PS: Maybe many people do not know that, journalists traveling with the expedition Jon Krakauer later wrote Into Thin Air of the work is about to conquer Everest journey he and members of the delegation of Rob Hall. And he is also the author of Into The Wild immensely popular movie was adapted into a 2007 film has inspired a lot of young people.