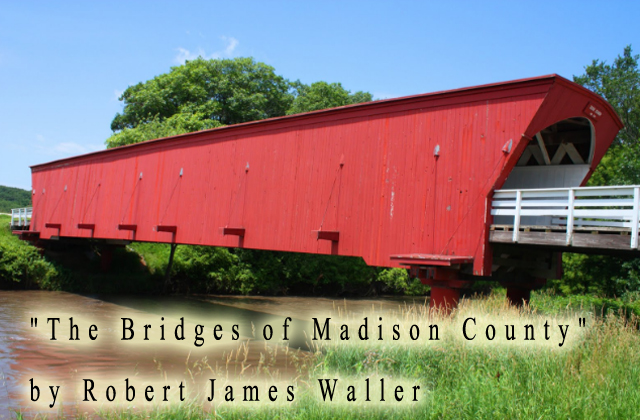 The boundary between love and guilt sometimes separated only a vision. This love has been stuffed Francesca and Robert James Waller Robert Kincaid in a gentle but deep in the classic novel “Bridges of Madison County”. They had accidentally bumped into the biggest boundaries of ethics and responsibility is still madly in love with each other.
That’s still sunny autumn day yellow hong southern outskirts of Iowa, the United States of 1965. The story begins with a strange encounter of Francesca Johnson, an over 40-year-old woman, a housewife typical daily casual around a small kitchen and Robert Kincaid, a photographer of the magazine National Georgraphic over 50 divorced and become familiar with the single life nomad. The so-fateful day, Richard and 2 children goodbye Francesca few days to Illinois State Fairgrounds, and Robert Kincaid, the search is on his way bridges in Madison County in Iowa roof to release the material for “The Madison county bridges “.
Robert stopped doorstep Francesca, who was sitting relaxed on the front porch drinking tea to ask directions. And suddenly, the emotion and instinct restricted women during 20 years of living with Francesca Richard resurgence resulted in the desired bounce her ultimate is accompanied Robert though initially simply directions for you. They chat, they laughed, Robert photographing Francesca, they cook dinner together. Then they also fear the rumors surrounding the small town was when Robert overheard stories of cloud free woman weaving on a family about to crash somewhere in the tavern. Francesca tried to restrain before lured from Robert, the emerging healthy veins on his body rippling, silver hair with curls spots touch greasy sweaty nape mesmerizing body collisions gently as they stood close together.
So … what’s the next?
We can not support that things erotic. Francesca is a peaceful shelter with a gentle husband, worked meticulously, loving wife and children. So what made you suddenly irresistible emotions, passions from Robert? They had not slept together? They love each other right?
They have. In just 4 days. And then never again.
Francesca had to struggle to tired ideological boundaries between the family’s grim, accountability and true love. She is no longer a teenager twenties can do things according to the call of love. But only until she met Robert discovered the main things you did not know, do not understand about myself. Robert gave Francesca the wonderful things the most beautiful, seemingly simple things, but in all these years as a wife, a mother, she does not have. Then the luck of love he must also pass away and they only know how to love each other in silence lifetime later. Except 4 days in paradise as it is with Robert, Francesca had never contacted him again rounded square live responsible, respectful with Richard – her husband.
As for Robert, he must be desperate hid the biggest of his life in a drawer in the old heart, wrapped it again. Later, Robert Kincaid once cried when telling a friend about my love and Francesca. Tears man, fanfare, but it hurts. It does not drop by drop to specify a certain anguish, but it must be able to fall forever, in silenced.
Robert James Waller is not clear to us when reviewing pictures of Francesca or write to her, Robert Kincaid had cried or not. But really, if you can imagine such a man between this life, surely could not bear to look upon the corner of his red eyes. Robert is a heroic people, because he has not led Francesca go, he let her decide. That, it was also recognized Francesca: “Robert, I have not said before. If you hold me in your arms, carry me to the car, and she was to follow me, you will not say anything. And he did not need to do that, he just told me to follow, I also go. But I think he will not do so. He was too sensitive, too aware of my feelings. And I have a feeling of responsibility of the children here. “
Their love, finally no longer prevail against sacred things than that: family responsibilities. And affordable, Robert Kincaid tears falling is because I knew it was the only thing he could not give Francesca once the photographer’s career was closely linked to his life?
I like “The Bridges Of Madison County” also because it contains such great pain, is the insiders, must accept to feel happy with their misfortune. I do not believe the love story as Francesca Johnson and Robert Kincaid’s only novel. In our life, there are so many styles that cross the left called “adultery” or “3”. Love is never at fault, except that, in some ways does it always have to go along with two words: Responsibility. I know people who accept life as a third person. I also know people willing to live with that partner in their heads not only a love. Like the moments before Richard died he told Francesca that: “I know you have dreams own. He unfortunately did not bring me back her dreams. “
The emotions that “Bridges of Madison County” gives readers and real, just dreaming, but also far away so close. There are times, in the journey along this novel, I will feel bitter when I think back to all the pain of Robert, the security division of Francesca poor. This novel is also transmitting a cinematographic work of the same name and received the support of the wider public with the acting of the two main actors: Robert Kincaid as Clint Eastwood – who is also the director) and Meryl Streep as Francesca Johnson. After decades, until now, “Bridges of Madison County” still attract readers a strange way. And I also hope that to go on forever, so the bridge would last immortal love of Robert Kincaid and Francesca Johnson.